A downloadable game for Windows and macOS

SpaceTone is a rhythm game combined closely with story.
In the game you will play the role of Reaper who judges dying lives through music.

Our space is filled with countless tones,
which take the form of countless souls.

As an operator of life and death,
YOU are the one who dive into music,
and examine those on the verge of death.

Where would you lead them to?

Note: The demo version is about an hour long. Hope you like it!

If you have any question or Bug, please leave your comment or
contact us by following links.

hoping for key bind settings, I'm not used to sdfjkl, and i would prefer dfvnjk instead, and i desperately need a calibration settings for the device delay

i wish that you could chose how many keys there are. I tried to play it on PC but its 6 fingers and I wish i could put it to 4. I'm not good enough at beat games to be able to use anything above 4 fingers. So would be nice to switch how many keys the songs have.

It's sad that this games never gonna be continued

I would love to play this game but for some reason, it wont let me download the game... i was looking forward to playing it.

This game has fascinate arts. However, as a rhythm game, it needs to be polish, especially the note efficiency.

I wanna play it but for some reason it wont download ;-

The game softlocks when I try to play level 3, and after that it happens to the other levels as well. The game music starts and the background shows up but the notes don't and it stays like that.

It'd be really good if you can add in settings so we can choose which keys signify which line as I wanted to use the keys d f g h j and k because my hands are small meaning I can merge my hand to the other side if I want to without the fear of misstepping. As of right now it's pretty easy to complete all of the songs with a least a C because you can just keyboard smash through it all (which I enjoyed a lot). I don't know whether it's just my computer but every time I finish a song I have to close and open it again so the game won't go slow and glitch out. My computer has over 100 GB free so storage can't be a problem. It would be helpful if you could fix it. It would look really nice if you can have a wider alternative for colours of the notes. I do really love the story and the artstyle. The soft drawings are really calming. :D

Okay okay here me out. Is that. Jake the Dog and Finn the Human. THEY BOTH WEAR HATS AND THEY BOTH ARE YELLOW DOGGOS.

can i help transleting for portuguese?

Awesome game. This was one of those works of art that hit me in my soul.

Amazing, amazing, really amazing, i loved the art and the music i am anxious for your game.

Ps: The bad thing is that I will not be able to play the final game because of the requirements ;-;

why the the third time i play it doesnt work? the music cant load out and it been a picture?  Y

i havent play this but trailer is really great

Hi, Coconut Mousse
Thanks for your comment about trailer!

First impressions on the demo (played up till Eve Special)

PS: I have experience in making notecharts for Stepmania for years. Feel free to contact me if you need a tester and/or note charter :)

Hi, eos428
Thanks for your feedback!
We will improve some of suggestions you gave before game release.
(ex:add number of chart) So please expect it!

That's Great! You have experience in making notecharts for years!
Maybe we can cooperate in the future.
Would you mind leave contact information by email for me?
milk@spacesoysauce.com
Thanks!

Sent an email at you!

Some first impressions on the English Demo:

The game looks great, but I feel as if some of the art is a little bit blurry, despite setting it to 1980x1080 and testing on both fastest and fantastic quality settings. The effects are a little too much for me, with all the combo flashing on the sides of the screen and the massive explosion effect when you hit a note, blocking what notes you can see. The note explosion effect feels so laggy.

The music is absolutely beautiful. At times the audio can be too loud, so hoping that there is an option to adjust this later on. I also like how you unlock the story as you play through the songs, although it's not really explained precisely how you unlock chapters and songs, other than to keep repeating a song until you get a good score or something.

I've already spent my entire day playing this game, it's too addictive.

Hi Sonny6155:
Thank you very much for such a rich feedback! All of the suggestions are very important to us, and we will take a cautious view of them.
We will continue to improve the performance and fix the bugs of the game before the early-access version launch. Stay tuned :D

Hi Thasyka:
Yes, the demo version is end at Eve. We'll add BPM and difficulty number where you setting speed in the next version.
And we had a calibration setting menu before but it has a little bug so we hide it temporary :P. We'll put it back after fixing it!
Thanks for your suggestion :D

This looks so cool! Could you please make it for mac?

Hi, NegaTori
Thanks for your feedback! We'll make mac version as soon as possible~

There's no way to claim this. The page only has a download button.

I've always loved rhythm games and this one is no exception. The music and visuals were great. The only complaint I had was I'd like to see the keys on the screen. I just personally feel that it would help players, especially new ones, and then for other people to have a setting to turn it off. But that's some of my thoughts. Here's my first impressions video:

Hi, Mutant Gamer
Thanks a lot for the first impression video you make !!!
About your feedback, we'll add 6 key hints in the game,
maybe let player adjust transparency of hint in setting page.
And Thanks again for your feedback! :-D

This is a really great game! Truly the best rhythm game I've ever played (I haven't played many rhythm games o.o). The art is great. It's really hard and intense. The only problem I have with this game is that the music cracks sometimes. Maybe it's because I chose Great graphics instead of Fastest. Who knows.

Looking forward to the full version!

Hi, NNNIKKI
I appreciate your feedback and your support!!
And we still improve performance of game.
SpaceTone full version will launch in recent month, please look forward it!!

There's no option to claim the game. 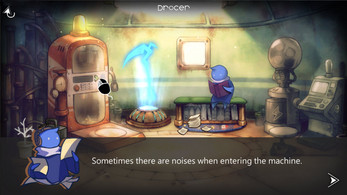 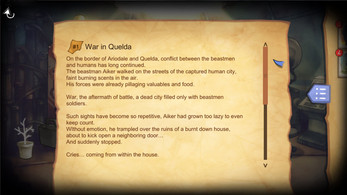 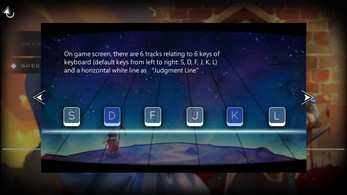 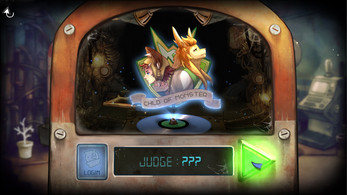 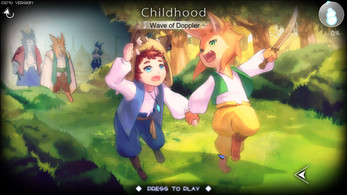